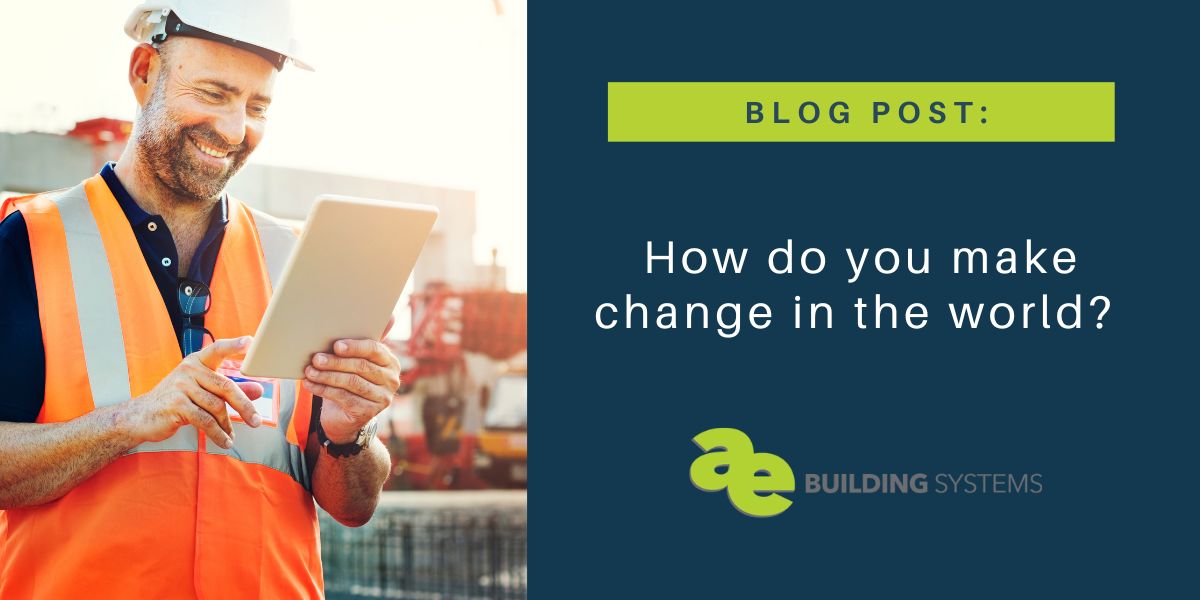 Change happens slowly and in small ways, with every single purchase and every decision we make. As consumers, we each have opportunities to make decisions and at AE Building Systems, we’re at the core of these small, everyday decisions that are making a real difference in our world. But, another way change happens is when we see regulations and laws change.

The process of making real change for the better has so many other applications outside of sustainability and doing right by our earth. However, we’re beyond thrilled to see recent changes in municipalities throughout the state of Colorado regarding energy efficiency. These are signals to us that change is finally coming on things that used to be mere suggestions now becoming a requirement.

We don’t always think about it being a big deal, but small changes to building codes can actually make a big impact. Simple requirements force everyday decisions to higher standards, and in the case of these energy-efficient trends, the higher standard means a lighter carbon footprint across the board. In the past, some of these building decisions might have been a nice idea, but when push came to shove or budgets got tighter, the energy-efficient measures might have been the first thing to go. However, when they’re a requirement, there’s simply no room to question it. With each new code change to be more energy efficient, you start to see a better carbon impact across the board.

Changes On All Levels

As we’re based in Colorado, we pay close attention to the local municipalities and those in our immediate vicinity. We’ve seen municipalities including Denver, Boulder, Golden, Fort Collins, and others increasing their energy-efficient codes across the board. However, on a national level, we’re seeing significant increases in code requirements as well, including New York City and Boston. And, Passive House Design plays a larger role in these municipalities because it easily meets, and often exceeds, the new code requirements.

However, these changes are not just happening here in North America. In fact, the global push for energy efficiency has been largely attributed to the Paris Agreement, established in 2015. The agreement is focused on addressing climate change with goals to reduce greenhouse emissions, support developing countries’ efforts, and collaborate together. While the United States was part of this unifying group originally, the 2020 administration pulled the US out of the Agreement. US involvement or not, the Paris Agreement has had a major influence on the carbon impact on the globe and we’ve seen countries make significant changes in just a few short years. Others have followed suit, realizing that energy efficiency has major benefits from so many angles. This global initiative has put climate concerns and energy efficiency as a top priority for many governments, and as a result, we’re seeing the effects even in our local municipalities!

How do we enact even greater change?

While there’s much to celebrate, there’s still a huge opportunity to do better by our planet. Here are just a few ways to continue the journey toward better energy efficiency and lower carbon impact to the earth:

We get excited over here about building codes, especially when they support energy efficiency. We also love seeing the ripple effect of what these codes do for the local carbon impact. As an integral supplier of energy-efficient products, we know how important these building codes can be toward a bigger, more energy-efficient future!